Back at E3, Valve’s Gabe Newell made a surprise appearance in the Sony conference to announce that Portal 2 would be hitting the PS3 with Steamworks support. The big news today is that Portal 2 on the PS3 will allow users to link their PSN accounts to their Steam IDs, unlocking cross-platform play/chat as well as the Steam Play version for PC/Mac. In this household, at least, this dramatically changes the status quo. 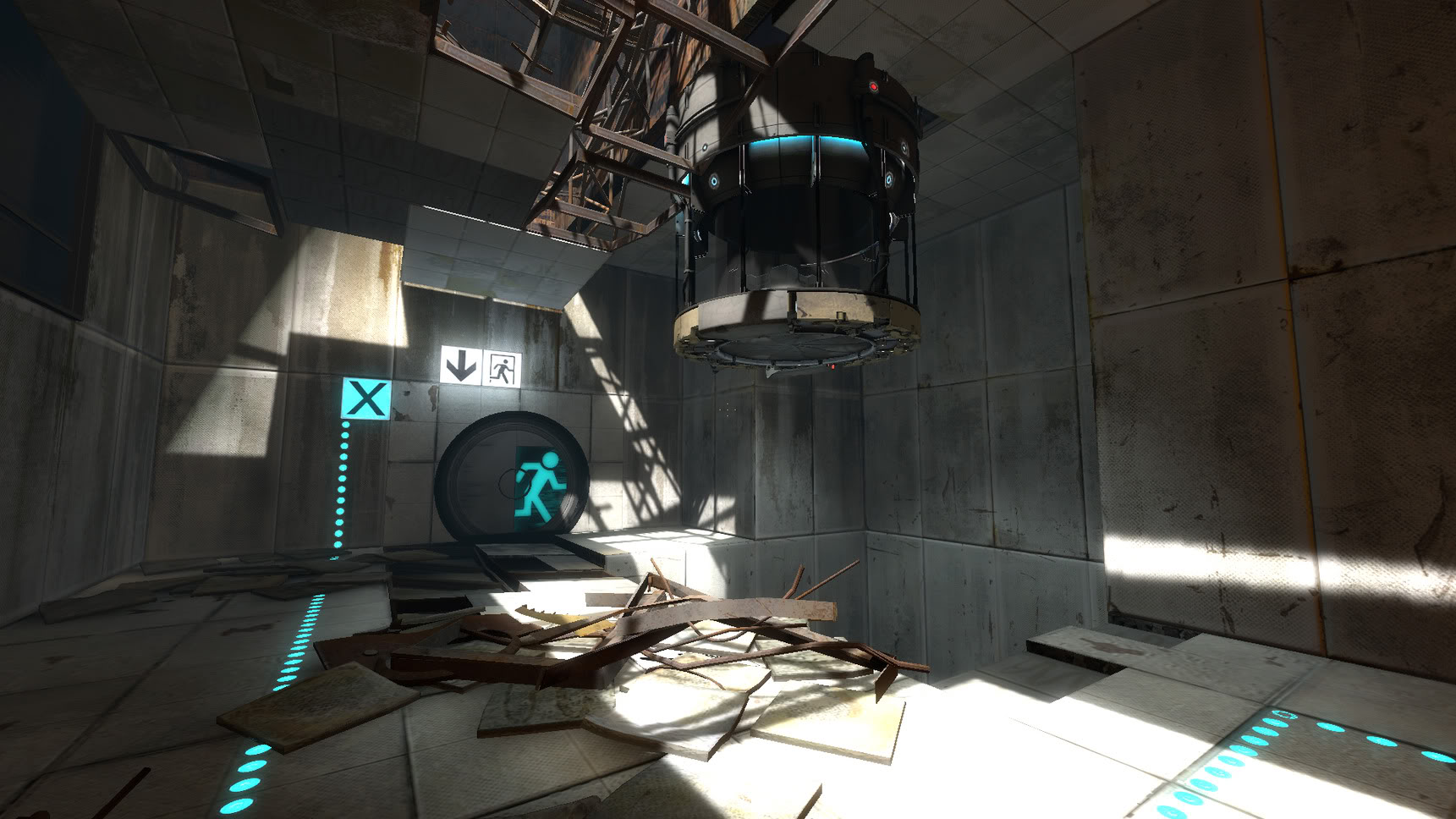 Since the start of this console cycle, I’ve used the 360 as my platform of choice for multi-platform titles while buying Valve titles off Steam and reserving the PS3 and Wii for platform exclusives. Now, I can say with certainty that Portal 2 will be my first multi-platform purchase for the PS3, and the PS3 version will likely become my default platform for Valve games if this is the benchmark for future titles.

While I’m a huge fan of Valve and Steam and I consider this a massive victory for the multi-platform gamer, another part of me is still left feeling a little uneasy. As great as Steam is, there’s one demographic that I believe finds it a little bit lacking in comparison to platforms like Xbox Live or the PlayStation Network – gamers with families.

I think one of the most notable developments of this console cycle has been the appearance of account-based gaming. While Steam has had it for a while, it really took hold in late 2004 with Half-Life 2’s release, and as this generation of console hardware came to market the new Xbox Live and Sony’s PlayStation Network brought per-user control to the consoles.

One of the biggest user benefits to individual user accounts can be found in multi-person households. As recently as the Xbox/PS2 era (and, hell, even today on the Wii/DS) dealing with saves and settings was a precarious handshake agreement of “Ok, here’s my game, and here’s yours. Please don’t screw anything up.” I’m sure all of us can remember those fateful days when an oblivious friend, significant other, or child accidentally overwrote or deleted those hours and hours of an as-yet unfinished game.

Today, everyone gets their own account and can take sole ownership of their profiles, friends list, settings, save games, high scores, and achievements/trophies. Which, for a medium defined by an individual’s experience, is absolutely perfect.

Steam has what I believe is by far the best individual user account, which of course allows permanent access to download, access, and play your titles on any PC (or Mac, now, where applicable), and the recent addition of Steam Cloud for cloud-based setting and save game storage makes it the perfect way to play at home, at work, on a laptop, or anywhere else you have access to a PC.

Developers and publishers, of course, like accounts because they’re another weapon against piracy. We’ve seen it all over the years – physical disc checks, CD-keys, SecureROM, online authentication, limited installs – and limiting a copy of a game to a single user account is one of the strongest anti-piracy measures available. 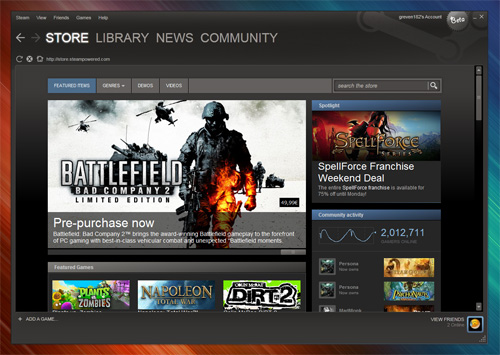 Steam may be the undisputed king of go-anywhere gaming, but unfortunately by locking purchases to a single account, it comes up nearly empty-handed when operating with multiple users under a single roof. My wife and I both enjoy playing games on the PC. We have separate computers, and she will often express interest in games she’s seen me playing. As I buy more retail titles with Steamworks and more digital titles direct from Steam, I find myself having to buy more and more duplicate copies of games.

One of my many soft spots for physical media is the ease with which family members could share it. In the past, my wife could simply grab a game off the shelf, install it, and play it as long as she had the disc in the drive. Only one of us could play at once, but with the exception of our time playing WoW, we could make do with a single copy shared between us. Now, not even the physical media in the drive is enough – whether activating a retail Steamworks key or purchasing direct from Steam, the only option is to buy a second copy. This almost always leaves my wife waiting for Steam sales to add new games to her collection without breaking the bank.

Not every family will run multiple PCs, but Steam also proves restrictive on a single family-shared machine. No matter how many games have been downloaded on a machine, only the account owner can access them. If I were to replace our broken laptop and start populating my Steam collection, or if my wife started using my computer, she’d still have no opportunity to play them without playing from my account – and thus losing all the user-facing benefits of modern account-based gaming.

I know, I know, #middleclassproblems, etc. I also have to admit a lot of these limitations are completely understandable. But we only have to look to another room in the house to see possible family-friendly solutions. 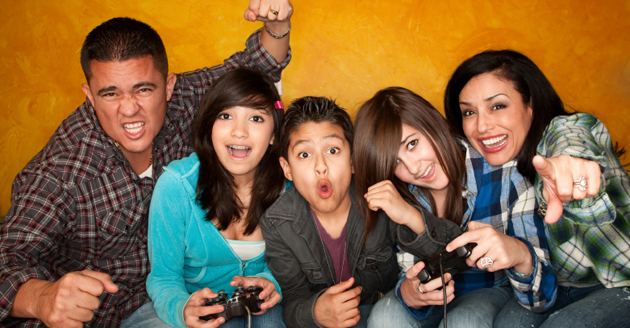 Console gaming has always focused around the physical media rather than the machine, which makes it an ideal choice for family gaming. When you put the disc in the drive, the person holding the controller gets to play the game. Even as consoles shift to more digital content, Microsoft and Sony’s relatively (in comparison to Steam, at least) lax rules for downloaded content allow my entire family to game with ease from their own accounts. I can purchase all the games I want on my XBL or PSN account and share them with my family, including my son’s offline accounts on each system.

Another example in games is BioWare’s social network, which allows a user to specify multiple XBL gamer tags and PSN IDs within a single account, ensuring that multiple users can enjoy the same content. We even see this sort of sharing in other industries, with phone companies allowing additional lines on shared plans, Amazon allowing multiple users to share Amazon Prime subscriptions, and even iTunes removing DRM (as of iTunes Plus) allowing music library sharing on a home network – a refreshing breath of fresh air from the otherwise draconian music industry.

What’s the solution? Maybe Valve could make additional copies available to share with family members at a discounted rate, similar to the L4D 4-packs. Perhaps users should be allowed to link accounts and use floating licenses like those seen in business software, allowing one person at a time to play a game (and still requiring multiple purchases for simultaneous/multiplayer use). A computer could be flagged as a “primary” system, allowing a user to make his/her Steam purchases available to other Steam accounts, but only on that machine – somewhat emulating Microsoft’s Xbox 360 rules. As a leader in digital content on the PC, Valve has a unique opportunity to bring family-wide gaming back to the platform in a way that is fair for both developers/publishers as well as the end users.

I will be buying Portal 2 on the PS3 and supporting Valve’s effort to bring Steam and Steam Play to multiple platforms. It’s exciting, and I hope that down the road this may help open the door for the many indie developers now finding success on Steam to branch out and find further audiences and opportunities all across the gaming spectrum. But I’ll also be hoping that as Portal 2 moves to the PS3 that everyone in my family has the same opportunity to enjoy it that I do.